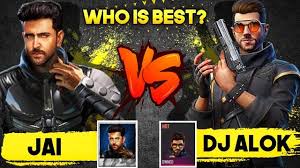 best between DJ Alok & Jai The Free Fire is the game that has 500million+ downloads in the Google Play store; basically, this game was a 10-minute survival shooter game in which the players have to protect themselves. The Free Fire game has offered a variety of characters to the player with different abilities; this provides advantages to the player on the battlefield. In the current situation, there are about 33 characters available in the game.

Which also includes Jai and DJ Alok characters.  Each and every character has special abilities and special personalities which make them different.

The players took many advantages from each character. In the recent collaborations with Hrithik Roshan, has been introduced as the new character named Jai.  And the DJ Alok has also been in the game for a couple of seasons now in the Free Fire.

DJ Alok has with a special ability called “Drop The Beat”, this has a 1 level functionality which creates a 5m aura. This increases the ally movement speed by 10% and also restores the 5HP/s for 5 seconds. This has an active movement that can be boosted up to level 6 with the characters level up cards.

That fall under the AR, Pistol, SMG, and SG classes.

And on the other hand, the Jai has the passive ability in the game.