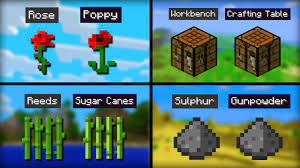 The Minecraft player would have to give a look at this post, in this article we are going to give information about the Top items that have been renamed in Minecraft. A lot of the items’ names were changed during betas. Beta testers were able to see the name changes before anyone else.

Wool is an item that is dropped from sheep in Minecraft, and players can use it to create things such as beds, banners, and more. Before the name was changed in the beta 1.0 version of Minecraft, wool used to be referred to as cloth.

Before being updated, dark oak logs were named “roofed oak logs” since they are only found inside of the foot forest biome. Dark oak wood logs were added to Minecraft in the 1.7.2 update.

It is used to build fireplaces or a large torch. Netherrack is a pretty common block in Minecraft since it makes up most of the nether. It was also referred to as Netherstone before it was finally named Netherrack after the alpha version of Minecraft. Netherrack used to be called Bloodstone, but that is not the only name that it had before.