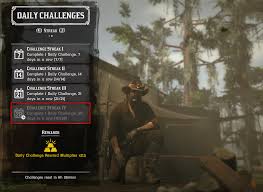 This was interesting news for you if you are a Red Dead Online player you have to give a look on it. There was a hot announcement was made that the Red Dead Online game will e getting an inexpensive standalone edition. The Rockstar has announced that there was change has been made to the daily challenge streak work, When the standalone version arrives. Red Dead Online

Daily challenge streaks will reset every 28 days, awarding players with a RDO$ bonus and a treasure map.

This has maintained an unbroken streak to the daily challenge for the players and it has been reliable the way for Red Dead players to earn more gold. Red Dead Online’s in-game currency that is also available for real-money purchase in the form of gold bars.

The players have to logging in and have to complete one challenge daily at least in a every day basis.

The players of the Red Dead Online could keep the rewards which were healthy for the multiplier again.

Which capped out at 2.5x on the 28 day mark. On the starting month of December 1st, this was going to be change.

Instead of keeping that 2.5x multiplier, players will see their streak reset on day 28 and have to build it up from zero again. This has put an effect significantly to the daily challenges.

The players now have less gold to complete the daily challenges. The many players who have maintained their streaks for hundreds of days are not pleased at all.

The general consensus is that Rockstar is trying to steer players toward purchasing gold rather than farming it with the daily challenge multiplier, which seems plausible given that the standalone Red Dead Online mode is priced at only $5 USD.