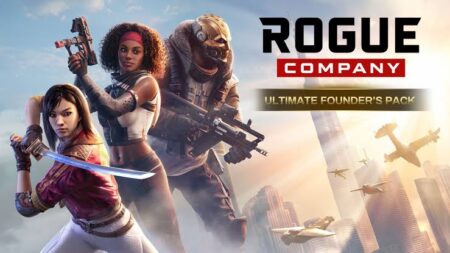 Rogue Company is a third person shooter over the shoulder tactical Game. Where you decide your faith by defeating the enemies who are threat to the world. Either you Defend the bomb site or take over the location and defeat Counter attackers.

Rogue Company is a great upcoming character-based third person shooter developed by simply First Watch Video games and published by simply Hi-Rez Studios, author of Smite in addition to Tribes: Ascend. Rogue Company would not but have a release date but their closed beta, accessible to players of which pre-order, can be found.

When can you play Rogue Company?

It’s in Beta/testing stage right now. They just launched an update to the beta version adding some new map. It’s Free to Play when the game will be launched but right now it costs some money. It’s priced around 14.99$, 39.99$ & 59.99$ in three different packs for beta tester. If you want to play this game you can buy the game at their website Click here

You can also read

Which platforms is Rogue company available on?

This game is available on Pc, Ps4, Xbox and Nintendo switch. You play this game right now because it’s almost on all platforms. If you wanna see 15 minute game here’s video watch to learn the game mechanics and how it’s developed. According to my opinion this game may get compressed by other competitors but you never know. It can go from nothing to viral in seconds.

You can battle it out in 4v4 match Divided into three game modes currently available, they are as follows

Demolition is most commonly played game mode. You need to defend or attack two of the bomb sites located on the map. This is their competitive game mode for maybe esports in future maybe or some tournament.

This is the dialed down version where you get finite respawns if you die. Your team has finite amount of lives/respawns. Either you can hold the objective or focus on eliminating lives of enemy team. Who completes the either or wins the game pretty basic game mode.

Extraction is like domination on call of duty or others games. This where you hold the objective given on the map which changes after some time every game. Basically team to hold the objective longest is the winner or extract the objective. This gameplay is not out yet, but maybe soon.

Combined with the officially announced settings, there are furthermore rumors of the 2-vs-2 mode called Wingman. Expect more info whenever the game gets an official launch date.

The streets of Miami are illuminating. Electrifying sounds of nightlife echo through the night. The Zero Drop Rave is the place to be, but a menacing danger looms over the EDM music and laser lights. Rogue Company comes to save the party and the day on this new map called Vice.

Vice is the new map coming to Rogue Company. This map looks a little different than any other map in the game, with their purple, pink and blue aesthetics, and technological features. The map is for medium and longer-range Rogues in mind, with asymmetry to give players a new flavor in map design. Vice will be available in Practice, Strikeout, and Demolition game modes.

Rogue corporation is releasing new shooting range teaching mode. Everyone will have got access to the newest training setting, collectively Rogue runable if they the player provides them unlocked or perhaps not.

Players may be able to be able to test Rogue guns, their skills in addition to boost their aim against moving or perhaps stationary targets. Currently there will furthermore be map ziplines so players may test their goal while using that will feature.

Rogue Organization has not the new leaver charges feature so far. The particular new feature produces serious penalties with regard to leaving games, which usually only gets a lot more punishing the higher players leave or even detach. Penalties are given to players who keep the overall sport, disconnected for the few minutes prior to the game ends, or even AFK for two minutes. Gamers that satisfy the above problems should receive a five-minute queue penalty prior to having the ability to queue once again. This specific gets even worse the greater offences, along with a second offence going to fifteen minutes, 3rd at half an hour and a 4th providing an 4-hour collection ban. Players will certainly reconsider leaving the game title.

Due to the fact for other quality lifestyle changes, players may have access to the refund button. In case players unintentionally bought wrong items within that buy stage, they can reimbursement them. Nevertheless, gamers will not become able to market upgrades and buys from models prior to the current one.

A quantity of balance modifications are visiting Bogus Company this storyline. The particular most notable of the selection is Scorch’s nerf. The girl Burnout ability is going from the 15-second timer right down to ten seconds, minimizing the girl impact in the girl ability window. Also, Vy is obtaining some buffs to the girl ability. Vy will now gain two health per foe taking dot harm from her toxins.

Additionally , devices like the flashbang and smoke grenade are gaining some impact with the previous getting a buffed radius and the second option getting earlier smoke grenades deployment. These power devices haven’t experienced very much of an effect hanging around so far. The Bassesse update aims to get them to much better, especially with how Vice plays.