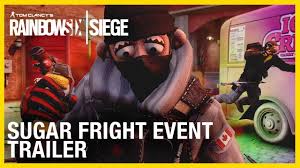 This mode has trapped the player into a nightmare where the player has to turn into a respawning puppet.

The event was called the Sugar Fright, and the plonks players have the straight into Frost’s fever dream where everything has been made up with the sweets and all the players who are the friends in this game look like horrible Muppet show the rejects.

In this game mode of Candy wars, the players get the two teams that have the attackers and the defenders. Both of the players have to kill the opponents and try to collect the candies from each killed players.

The team who got the first 50 candies will win the match, and I have to tell you that this was the first time when the Siege has made a mode like this where the players can re-spawn.

In this new mode, the players got the 10 Operators who are available. Along with the IQ, Termite in one squad, Pulse, Ela Castle, Nomad, and the Goyo.

These poor souls have the puppet treatment; these have traded their flesh for the fabric and for other stuffing along with their blood also. Halloween cosmetics give the player offer too, in the game.

The players can get these from the Sugar Fright Packs which can be got by completing each task, or if the player want it. They can buy them with the Renown or with the premium R6 Credits.

The last update in the game of the monster-players that was running around the Theme Park was different from the Siege’s. Some people thought that this was different because of the puppets.

This new mode was available and runs till 10th November 2020.