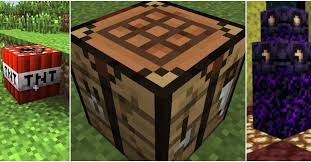 In this post we are going to tell you guys about the Minecraft: Topmost useful blocks

Obsidian also has one of the highest blast resistance blocks in Minecraft. Every Minecraft player needs obsidian to enter the nether realm. Gamers need at least ten obsidian blocks to create a nether portal. Without obsidian, players would not be able to access nether-exclusive blocks and mobs. In the nether realm, players travel much faster compared to the overworld. [One block distance in nether = Eight block distance in overworld]

Chests are an essential block used by every player in Minecraft. Chests are one of the oldest yet most useful blocks in Minecraft. Players use chests to store various items and blocks. Single chests can be turned into double chests by adding one chest to the side of the other. Double chests can store 60 stacks of items. They can also be attached to llamas, donkeys and mules. In a single chest, players can store up to 30 stacks of items.