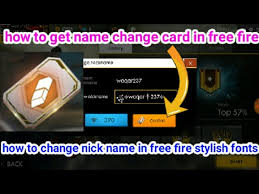 Change the name with the help of the Rename Card

The player can avail of the rename card as the reward in the Free Fire Game Regional Battle Season 3. The players have earned 10000 total points to avail through it. The players also play matches in the game for earning points, and also a Booyah in the Battle Royal mode this gives the players 150 points. The second and third place will give the player 100 and 50 points each. Along with that, every kill that the players’ bag will give 10 points. In the Clash Squad Mode, every Booyah gets 25 points and on a kill, the player gets 5 points.

These were the steps by which the players can claim the rename card in the game:

1: First of all, click on the profile present on the top-left corner of the screen.

2: The next step was to select the yellow name-change icon beside your name.

3: You will see a dialog box appears, prompting you to enter the new nickname.

4:  At last type in the desired IGN in the text field and click the confirm option. (It will have an icon of the card on it).