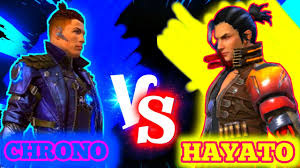 Hayato is one of the most popular characters in the game, and as his description reads.

He is a legendary samurai with a passive ability called Bushido.

However, the upgraded version of Hayato is named Hayato Firebrand, and it sees an active ability of Hayato.

Which is called the Art of Blades.

This active ability of Hayato allows him to reduce frontal damage by 20% for a time duration of three seconds. However, his ability has a cooldown of fifty seconds, and firing will interrupt using this ability.

As per Wukong’s character description in Free Fire, he is a Monkey King having a unique ability called Camouflage. It is an active ability, and at the primary level, he can wear a camouflage skin while standing still. However, once used, the cooldown lasts 300 seconds.

At Wukong’s maximum potential, at level 6, the cooldown of Camouflage is reduced to 200 seconds.

Chrono has one of the most insane and incredible abilities that characters can have in the Free Fire universe.

At the primary level of his active ability, called Time Turner.

He can create a force field that blocks 600 damage from enemies. He can also shoot at opponents from within the force field, and his movement speed increases by 15% during the same.

During Chrono’s skill activation, allies who are inside the force field get a 10% increment in movement speed, which lasts four seconds and has a cooldown of fifty seconds.