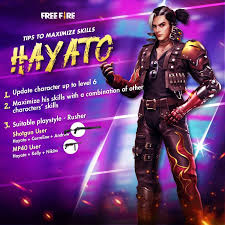 As we all know that DJ Alok was the number one demand of the free fire players. In-game description: ‘Alok is a world famous DJ, ready to drop a beat.’

And his ability creates a circle or ring of 5m long that increases the characters/player movement speed by 10% and replenishes 5 HP for 5 seconds. And the most interesting thing is that at the maximum level, players’ movement speed increases by 15% and 5 HP is restored for 10 seconds.

‘Kelly is an athlete, a sprinter.’At level 1, ‘Dash’ increases the movement speed by 1%. With the rise in the level, it enhances, and at max level, it increases by 6%. Combining this ability with that of Hayato’s would help users move quickly, and allow them to rotate around the map faster.

Laura is an outstanding special agent.’Her ability is quite good, as it increases the users’ accuracy by 10 when they scope in at the base level. At the maximum level of the character, that number rises to 30. This could help a lot of players gun down enemies using a scope more accurately.