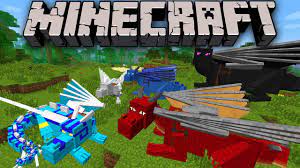 In this post we are going to tell you guys about the Dragon mods in Minecraft, players may find themselves wondering about hatching the ender dragon’s egg or other dragons that they could tame and ride into the sunset.

Minecraft players are familiar with the ender dragon and its sinister lore and can’t help but think of other dragons that can be included through mods.

The Wyrmroost is available for download at CurseForge and applicable for Java Edition. Wyrmroost aims to add several diverse dragons which can be tamed and utilized for players and their needs. This mod provides a wide selection of beautifully designed dragons that can be tamed. You will find befriending such a creature will take hard work and dedication, depending on the dragon and situation. According to the developers, they are designed for more than just travel.

Ice and Fire: Dragons by Alexthe666 and Raptorfarian: Java Edition

Ice and Fire is a mod created by both Raptorfarian and Alexthe666.

Which hopes to add dragons in a proper way. Both kinds of dragons spawn naturally as adults. And the news has reached us of a new discovery: Lightning dragons.

Powerful nocturnal creatures that deal blasting bolts of lightning to kill their prey. Fire dragons are described as capable of traveling most of the world with the ability to breathe fire.

The dragon experiences two stages once it has been hatched. Stage 1 is neutral towards players and won’t harm them, but stage 2 is hostile. The dragon will then grow and move into the second stage, where it becomes malignant towards players.

Ender mites, and villagers. Its health is also increased by 20. This Minecraft PE add-on allows players to spawn the ender dragon in an overworld and is a risky but fun challenge.