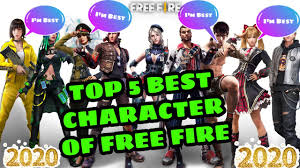 Hello friends we all know that free fire is all about characters and clothes. Here in this article, you are going to know the top 3 characters of free fire there the players like to play with.

We all know that DJ Alok is the all-time favorite of free fire players and free fire YouTube players. the demand for Dj Alok in the free fire was too high that’s why Alok will not come to the free fire store for free if you want to buy DJ Alok for your game then you will have to invest 599 diamonds which have price in Indian rupees at least 450 Rs.

Which was very suitable for this player? So let’s see the top 3 best characters of free fire all time.

Alok is one of the best characters in Free Fire and has an active ability called Drop the Beat.

The ability creates a 5m aura that increases ally speed by 10% and also restores 5 HP/second for a total duration of 5 seconds at the base level. At the highest level, the time increases to 10 seconds.

Alok has one of the most versatile abilities as it can be used to play offensively and defensively.

as a total of 50 HP can be replenished at the maximum level.

K is one of the most recent additions to Free Fire and arrived in the game as part of a collaboration with KSHMR. He has one of the most peculiar in-game abilities called ‘Master of All’. It has two different modes but the max EP of the player is increased by 50 regardless of the mode.

Jota’s ability is called ‘Sustained Raids’ and instantly restores 25 HP with each kill using Shotguns and SMGs. This ability has a cool down of 5s. At the highest level of the ability, i.e., level 6, the amount of HP recovered increases to 40.