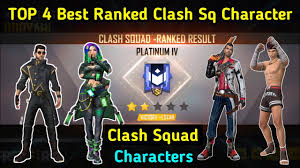 Hello, friends here in this article we are going to know the best characters for your free fire ranked mode, yes friends rank matters most in the free fire. so what are you waiting for let us start the blog and let us know more about it? Free Fire characters for ranked

According to his in-game description, Chrono is a bounty hunter from another universe and has an active ability called Time-Turner. With his base level ability, he can create a force field that can block 600 damage from enemies. He can also shoot at opponents while being inside the force field. His movement speed also increases by 15%.

During skill activation, allies within the force field get a 10% increase in movement speed, with the effects lasting four seconds. The ability has a cooldown of 50 seconds.

K is a professor and a jiu-jitsu expert who has an active ability called Master of All. In the Jiu-Jitsu mode, his allies within a 6m radius get a 500% increase in the EP conversion rate. Meanwhile, in the psychology mode, he can recover 2 EP every three seconds with up to 100 EP. However, the mode switch cooldown takes around 20 seconds.

The character can be evolved up to level 6 by using character level-up cards available in Free Fire. K can recover 2 EP every two seconds and up to 150 EP in the psychology mode at his maximum potential.

Dasha is a prankster and a rebel with a passive ability called Partying On. She has a level 1 ability, which enables players to reduce damage taken from falls by 30%, lessen recovery time from falls by 60%, diminish the rate of recoil build-up by 6%, and decrease maximum recoil by 6%.

Her maximum level ability allows the player to increase reduced damage from falls by 50%, lessen recovery time from falls by 80%, bring down the rate of recoil build-up by 10%, and decrease maximum recoil by 10%.