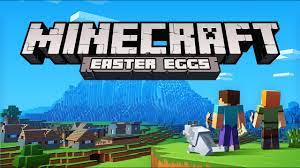 This post is for the players of Minecraft, as there are a lot of gamers who have to spend their lot of time on it. In this post, we are going to tell you guys about Minecraft: Best Easter Eggs.

PCX makes Minecraft look like a Game boy game, reducing texture settings to 8-bit. “Released” on April fool’s day in 2018, PCX was released as a piece of update 1.12. While this is a hilarious Easter egg that must’ve upset a lot of people in 2018. As well as PCX was claimed to completely revamp all of Minecraft’s textures. While as it is seen above, this is definitely not a false claim.

Some players may be unaware that if they give a sheep a nametag, named “jeb_”, when it is applied, the sheep will begin to change colors rapidly. The cute sheep shown above is constantly changing its colors.

The “Trendy Update” is a hilarious Easter egg released by Mojang in 2016. Fortunately, players can play on modpacks to recreate the technological feel. While it was a cruel joke as this update was said to include various technological items to Minecraft, which seemed very interesting. While it was normally known as Update 1.RV-Pre1, this update was teased by Mojang on April fool’s Day.

As seen above, players can select the LOLCATS language, while which completely changes what each block and item, is called. While most players are unaware that there are multiple joke languages in Minecraft.

As well as here is an example below:

In the LOLCATS language, Oak Sapling has been changed to Baby Oak. In addition to LOLCATS are a few other joke languages such as:

Lastly, these languages are tons of fun and can even spice up a play through that was getting old